Taylor is largely responsible for the development of the modern acoustic guitar. Since the mid-70s, they have been crafting innovative instruments that address many of the issues players have been navigating since the dawn of the steel string.

Whether it’s their “NT” bolt-on necks, which offer an unprecedented amount of adjustability, or their new “V-brace”, which reimagines the instrument’s internal structure to better follow the course of the strings, there’s always something new and remarkable coming out at Taylor. The most creative and ambitious minds recognize that there’s always room for improvement. All that said, their top priorities have always been consistency, playability, and tone. In a world full of traditionalists, they have asserted themselves as one of the major builders by taking the exact opposite approach. As a consequence, nothing else sounds or plays quite like a Taylor.

They are also unique in their commitment to affordability. Bob Taylor and his team are passionate about putting quality instruments into the hands of those with limited means. Over the years, Taylor has developed a sophisticated approach to guitar design that allows them to render a highly playable guitar out of virtually any “tonewood”. In fact, to illustrate this Bob actually built a guitar out of an old, oak shipping pallet in 1995. 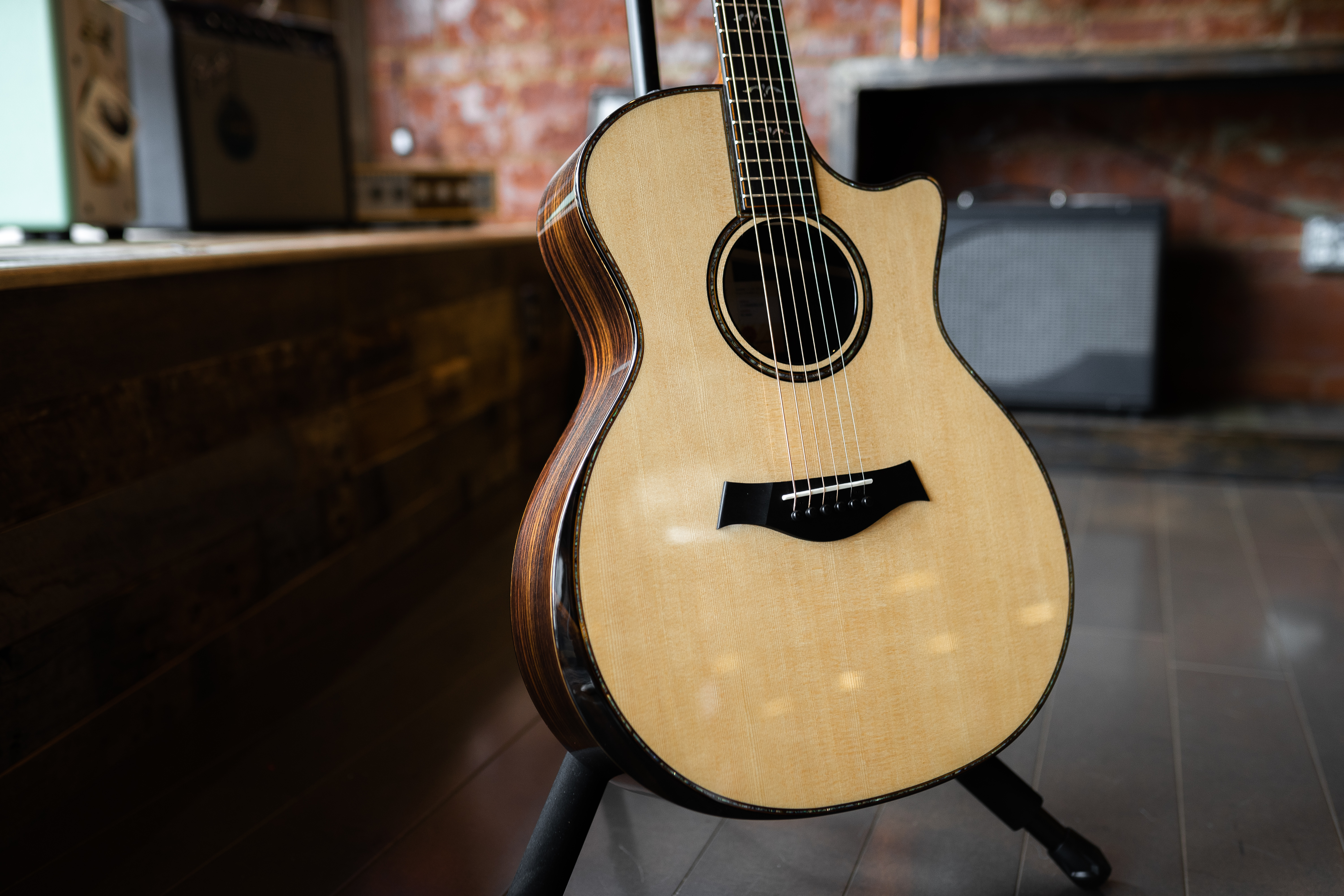 This commitment to accessibility later led Taylor to pursue other “exotic” tonewoods beyond the traditional Mahogany and East Indian Rosewood. Ovangkol, Sapele, and Tasmanian Blackwood are a few of the different options they now offer. They even purchased their own Ebony mill to maximize the useable timber and ensure ethical business practices.

The Taylor tone has always been unique and appealing (fully defined midrange accented by strong bass and shimmering highs). However, it would be rather unlike Bob Taylor to remain satisfied with a single recipe for too long. In 2011, he hired master builder Andy Powers to further refine Taylor’s visual and sonic aesthetic. Today, their upper echelon instruments are simply staggering. They have extended the sustain, focused the intonation, and amplified the overtones. Open chords sound simply ethereal, and single notes shine with an unprecedented intensity. They’ve also gravitated to earthier appointments such as wooden pick-guards and sleek, subtle armrests.

Though we only just joined the Taylor family, we have all been long-time fans of the brand. The ubiquity of their instruments is a clear testament to the much needed innovation that they brought, and continue to bring, to the world of acoustic guitars. Most recently, the aforementioned “V” brace is a structural re-imagining of the instrument’s top; the single biggest contributor to its overall tone. We made sure to grab a few of these higher-end gems for our showroom and the results speak for themselves. I played a V-Class 914CE before closing up last night, and I swear it was still ringing after I’d hung it back up and cut the lights.