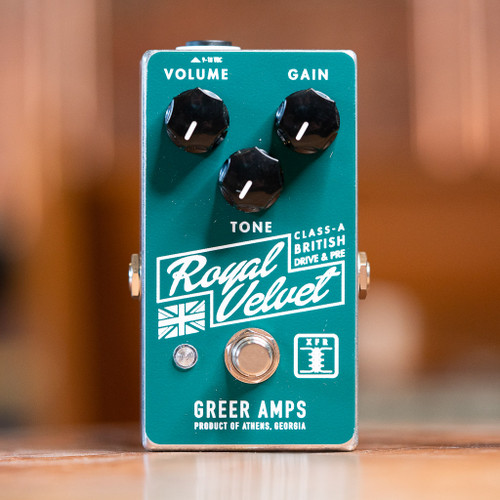 Greer Amps expands the XFR line with a new offering!  The Royal Velvet Class-A British Drive and Pre nails the feel and tone of two of Nick Greer’s favorite amps. Imagine a world in which a V*x 30 watter and a Greer Thunderbolt30 got together. In that world, you’d end up with a sound machine much like the Royal Velvet. This British drive and pre features the same transformer as the previously released, award winning SOMA63. After a year of working with this super versatile transformer, we have found a way to alter the feel of it by changing the “loading” of the transformer. This really brings the pedal to life, and makes it something truly unique in the space of drive pedals today. If you’re looking for that Class-A British grind with some chime on the top end, this beauty is what you need. The EQ is dialed in right between the AC and Thunderbolt30 tones, and the drive is oh so sweet. At 9 volts, you’ll get some grind and slight compression with the gain up and moderate output pickups. 18 volts provides more of a stiff feel, and more clean headroom with that British sparkle!