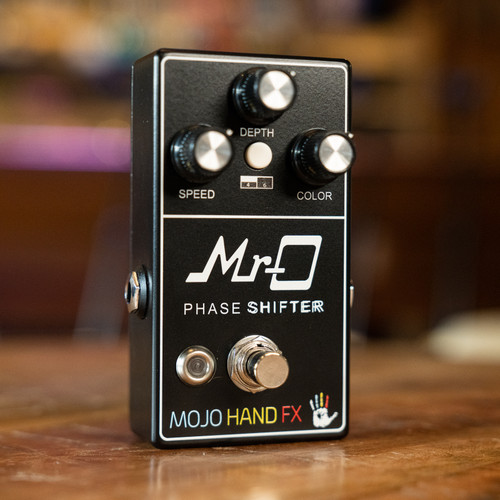 The Mr O was created to reproduce the special and beloved sound of the original phase shifter pedal. Released in the early 1970's intending to replicate the sound of a Leslie rotary speaker, the phase shifter turned into a widely popular effect that influenced the sound and role of the electric guitar ever since. After many hours of careful listening, playing, and tweaking, we finally arrived at a design that earned its colors and has the elusive magic of this historic pedal. Mr O stays true to the original's six phase stages while packing much more inside of a smaller, pedalboard friendly footprint. Since the original had just three speed switches and no other adjustments, we gave the Mr O extra flexibility to satisfy the needs of a modern instrumentalist seeking the tones of this vintage classic.

To most closely simulate the sound of the original, start with the Speed, Depth, and Color knobs pointing straight up to 12 o'clock with the switch UP in the six stage mode. You will now be closely emulating the sound of the original in the medium speed position. Adjusting Speed to the far left simulates the slow speed position, 2-3 o'clock simulating the fast position. We included a little extra to the far right for those who like to push the limits and like faster speeds in the vibrato realm.