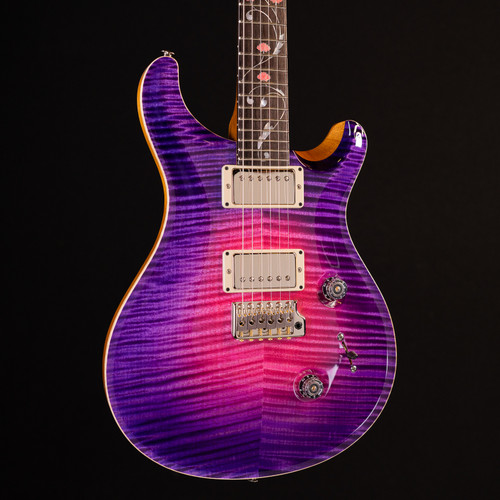 Here we have a gorgeous Limited Edition Private Stock Orianthi from PRS!  This is an extremely limited offering and we are very lucky to be one of the few dealers to have one of these guitars.  Please let us know if you have any questions, the won't last long!

Orianthi is known for working with top musicians, including Carlos Santana, Alice Cooper, Carrie Underwood, and Michael Jackson, and PRS guitars have been in her hands every step of the way. This limited edition is based on the in-demand guitarist’s personalized Custom 24 first made as a one-off artist build by the Private Stock team in 2017.

The Private Stock Orianthi Limited Edition keeps many of the specs as that original artist build, including a figured maple top, mahogany back, and a 24-fret, 25” scale length, Pattern Thin mahogany neck with rosewood fretboard. Like the original, the fretboard is adorned with a custom “Lotus Vine” inlay (similar to PRS’s classic “Tree of Life” design) that was inspired by a pen Orianthi sent to the team. The inlay is made from Asian Pink Coral and mother of pearl. Newly developed to showcase the Private Stock grade figured maple, the Private Stock Orianthi Limited Edition comes in Blooming Lotus Glow, which has a pink center glow that fades outward to a similar purple as the original artist build, which was opaque rather than hand stained. The electronics feature a volume and tone control with 5-way blade pickup switch, func- tioning the same way as a PRS Custom 24. The Private Stock Orianthi Limited Edition is outfitted with 58/15 treble and bass pickups, which offer a round tone.