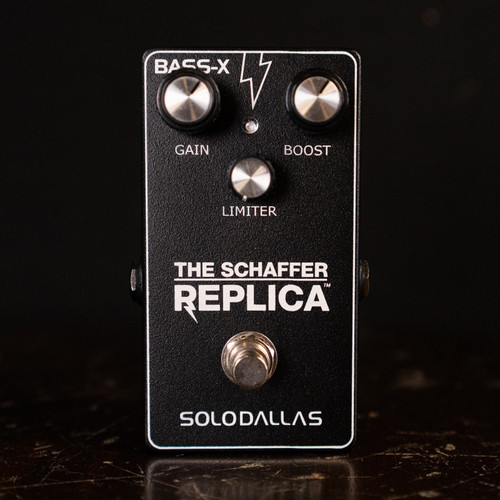 After introducing the Schaffer Replica Storm low end legends like Rudy Sarzo, Billy Sheehan, and Pino Paladino discovered it to be equally amazing on bass. Based upon their input we made a few minor changes to this beloved circuit to make it more conducive to higher amplitude and lower frequencies. To our loyal bassists who have waited so patiently, we proudly introduce The Schaffer Replica - BASS-X.

The BASS-X features a 100% analog signal path that is nearly identical to our EX Tower that has quite literally taken the guitar industry by storm. It perfectly captures our signature “Schaffer Sound” voicing and offers five interactive circuits capable of generating a plethora of tones for every bass guitar configuration and genre of music.

This interactive optical limiter+EQ expander+harmonic clipping circuit+boost+line buffer was reverse-engineered from the original Schaffer-Vega Diversity System wireless units used by nearly every legendary guitarist and bassist throughout the 70s and 80s. Our modern reproduction of this circuit has quickly become the secret weapon for some of the most influential guitarists today and the BASS-X is quickly becoming a favorite among bassists