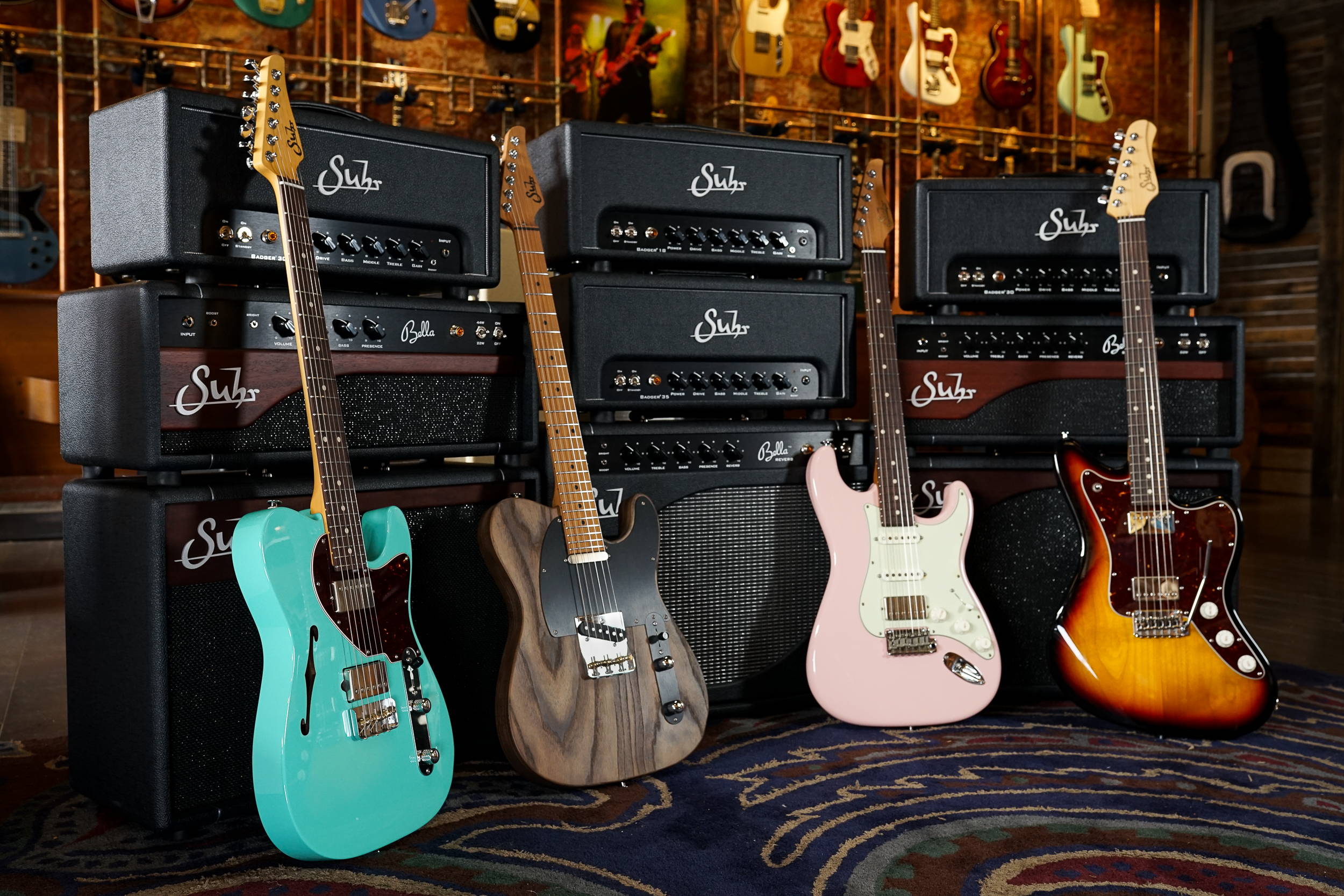 Suhr Guitars was created by a musician turned luthier, John Suhr. John Suhr started building to hone in that “perfect tone” for himself onstage. Suffice it to say, he succeeded, and today his creations have found their way into the hands of some of the best guitarists on the planet. In the boutique gear industry, Suhr has become synonymous with tone and style.

John is a perfectionist. Although he built his first guitar in 1974, it was another decade before he was satisfied. In 1984, while working at “Rudy’s Music” in NYC, John began producing “Pensa-Suhr” guitars (“Pensa” being Rudy’s last name). Under this brand, he built custom instruments for Mark Knopfler, Eric Clapton, Peter Frampton, and others.

After establishing himself as a brilliant guitar builder, John Suhr set out to design a tube amplifier that would likewise serve his musical vision. In the early 90s he moved to LA and began working with Bob Bradshaw of Custom Audio Electronics. Together, they designed the OD-100 amp head which Suhr still sells with the CAE logo.

In 1995 he was hired as a Senior Master Builder at the Fender Custom Shop. One of the most prestigious positions in the world of electric guitar, this is equivalent to getting knighted or receiving the congressional Medal of Honor. Here he garnered insights into the iconic line that would later influence his own family of instruments.

When the best and the brightest moves on to do his own thing, y’all better pay attention. In 1997, John opened his very own custom guitar and amps factory. Decades of painstaking attention to detail at the bench combined with the precision of modern CNC technology resulted in instruments of exceptional quality and consistency. Suhr produces sensitive and highly refined musical tools that become an extension of the guitarist. He knows how the masters play, and he craft his guitars, amps, and pickups accordingly.

With traditional and progressive builds that draw inspiration from the big Fender and Gibson while still being completely unique, Suhr has something in their catalogue for every ilk of player. They offer both “standard” and “classic” versions of traditional S and T style body shapes as well as an off-set and an LP. They even make have a line of modern” S-styles, specifically designed for shredders, that features some of the coolest figured tops and finishes you’ll ever see.

Beyond guitars, their Bella amp, an immaculately clean 6L6 pedal platform, has become a staple of versatility, while their silent single coil pickups have revolutionized the industry by banishing the hum without sacrificing tonal clarity. They even have a line of pedals that further allow players to refine and shape their tone. Wherever guitarists want to be, John Suhr is ten steps ahead. He’s assembled a team of practical innovators who know what it takes to command a room with six strings. At Suhr, they specialize in reconciling dreams with reality.

Here at Midwood, we take great pride in hand-selecting and custom designing our Suhr inventory. As working musicians, ourselves, we are deeply appreciative of how John Suhr has upped the game for the whole industry. His insights and innovations have made it easier for musicians to express themselves onstage and we are honored to be a dealer. We love roasted maple necks and limited edition finishes and carry a wide range of body styles and pickup combinations. Give us a call and let’s find or dream up a Suhr that will improve your tone and confidence on stage.