The first thing you’ll notice upon picking up a Maton Guitar is the way they “cut.” These are lively, powerful acoustic instruments that thump you right in the chest. There’s also an effortless, almost bouncy quality to the action that makes them a joy to play. Of course, they offer many different models with varied virtues and characteristics, but  Maton guitars have a sound of their own.
Read More
3 of 3 Items
3 of 3 Items

The Origins of Maton Guitars

During the 1930s, the steel-string guitar emerged from the parlors of North America and quickly became popular with musicians around the globe. It was portable, loud, could handle both lead and rhythm rolls in an ensemble, and sounded great solo. In Australia, however, one would have to squirrel away money and arrange for an imported Martin or Gibson if they wanted an instrument of their own. Bill May, a Jazz musician and woodworker from Melbourne took it upon himself to correct this dearth of fine guitars in his home country, and in 1946 he launched “Maton Stringed Instruments and Repairs.”

After 80 years, 2 workshop relocations, and well over 300 different models, Maton is still family owned and based around Melbourne. Bill May’s restless, early innovations resulted in a unique catalogue of instruments that prominently feature native Australian tonewoods such as Blackwood and Queensland Maple.

Maton builds Dreadnought, OM/Grand Concert (designated 808), “Mini”, and Jumbo body sizes. As far as wood goes, they largely stray true to Bill May’s original vision of a distinctly Australian guitar. They offer a wide range of instrument categories, but the “Australian Series” is the best example of their dedication to using indigenous tonewoods. Offered in both Grand Concert and Dreadnought sizes, the EA808 and EA80C feature “AA” grade Blackwood Back and Sides (and necks), and Bunya tops. Blackwood has a gorgeous, intense tone that is rosewood-like, but more present. Bunya is earthy and lively as a soundboard, falling somewhere in between Sitka spruce and Mahogany. The overall effect of this wood combination is enormous string-to-string balance and mid-range definition with strong warm overtones that support without overpowering. 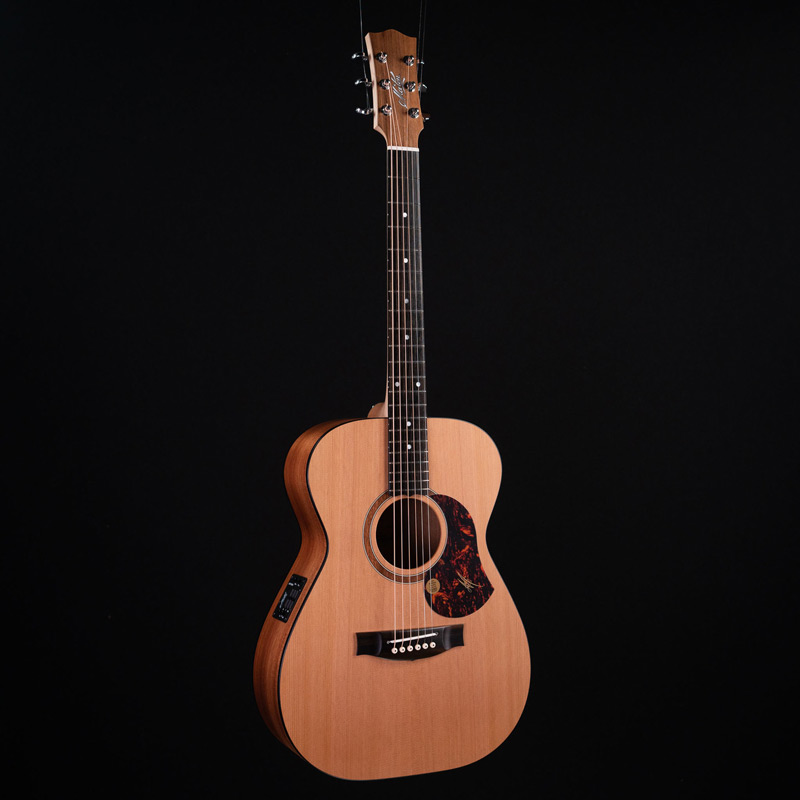 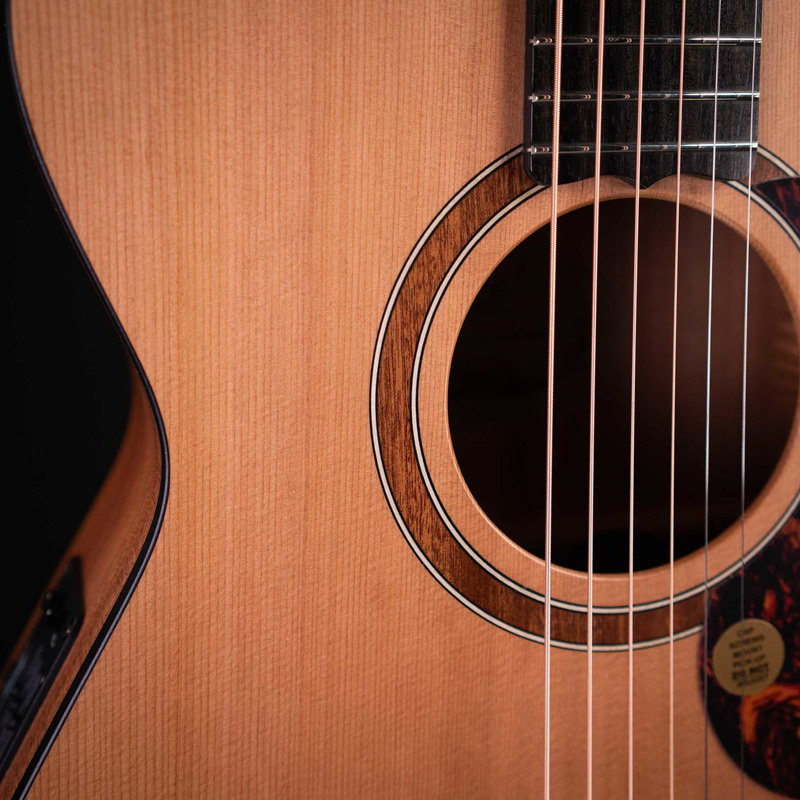 Blackwood is one of the most unique acoustic guitar tonewoods that Australia has to offer. It’s used by Maton on many of their models, but the Blackwood Series Matons are ALL Blackwood; top, back, and sides. This results in a tonal quality reminiscent of C.F. Martin’s vintage all-Koa guitars, combining mid-range definition with subtle overtones. Visually, these guitars are also staggeringly beautiful, often exhibiting fiddleback figuring. Available in Dreadnought, Orchestra Model, Mini, and Mini 12-string sizes, the EBW808, EBW70C, EMBW6, and EMBW12 are truly some of the coolest guitars that Maton builds.

One of the most expansive and carefully researched categories of acoustic that Maton builds, the SRS guitars feature Tasmanian Blackwood or Queensland Maple back and sides, an “A” Grade Sitka Spruce or Western Red Cedar top, scalloped bracing, a Queensland Maple neck, and a Rosewood fingerboard and bridge. The goal was to produce a high-quality line of guitars featuring all-solid Australian timber at an affordable price. The SRS guitars come in many different body styles and woods combinations, but here at Midwood we’re especially fond of the SRS808C, a Cedar/Blackwood masterpiece of an OM with a refined bracing pattern that generates a massive bass response and clear strong treble.

Maton has been building acoustic guitars for a long time, and since 1978, the BG808 series has included some of the best recording guitars built by any brand world-wide. The secret is in the carefully honed, smaller body size, which hits mics with expert precision. Everything you like about the sound comes through clearly on record. With high-grade Sitka Spruce tops and Blackwood back and sides, these guitars cut though any mix beautifully. The EBG808 Nashville is the preferred ax of country great Keith Urban. 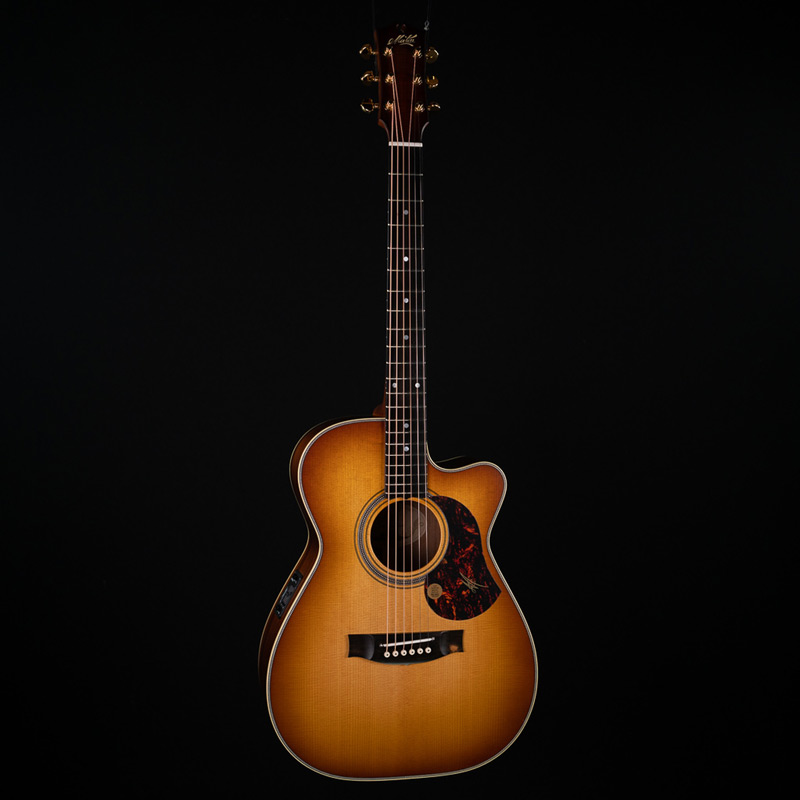 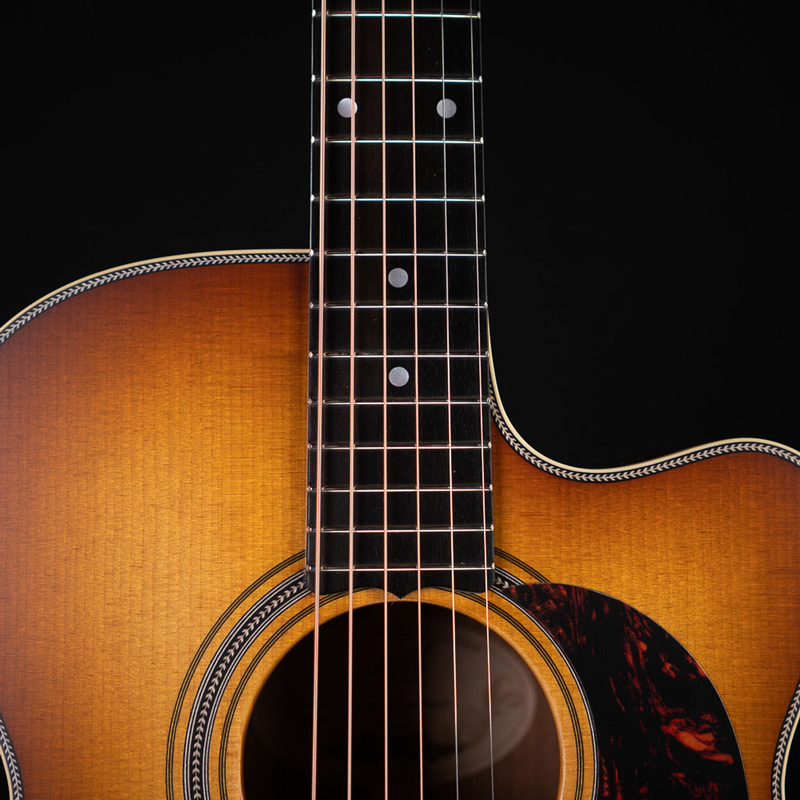 Although Maton prides itself on building acoustic guitars with predominantly Australian timber, the allure of traditional guitar tone-woods is impossible to deny. The Messiah series is Maton’s top-of-line. These guitars are built with high-grade Sitka Spruce and Indian Rosewood. They also feature a meticulous, ultra-thin UV finish and a thinner, slightly rounded back for maximum projection. The Messiah series proves that there’s more to Maton’s magic than just native Australian hardwoods. A Maton guitar is tuned, calibrated and voiced to absolute perfection. We recommend checking out the EM100 to see what the Messiah series is all about.

Tommy Emmanuel is a certified guitar player. This is evidenced on his signature Maton guitars by the C.G.F. inlay on the 12 fret. He was dubbed such by the late, great Chet Atkins, and anybody who’s seen Tommy pick would be inclined to agree. The man can do miraculous things with a guitar, and his line of Sitka Spruce/Queensland Maple models are a testament to his virtuosity. These guitars can go anywhere he can, and that’s saying something!

Don’t let the name fool you, the Mini Maton is as mighty as guitars twice its size. These parlor sized instruments exhibit exquisite focus and clarity, making them perfect for both travel and the stage. Built in a variety of wood combinations, it's also easy to find the ideal Mini Maton for each unique playing style and tonal preference. It’s simply uncanny for so much tone to exist in such a small package.

Another feature that definitely bears mentioning is the way they sound plugged in. Their proprietary AP5 pickup system combines both microphonic and transducer technology to incredible effect. With a good sound system, the room becomes an extension of the instrument itself. You’d be hard pressed to find a more transparent, commanding, amplified acoustic tone.

Call or Email us about a Maton Today!

With artist endorsements from Tommy Emmanuel, Eric Johnson, and Keith Urban, Maton has asserted itself as one of the major builders on the international guitar scene. Furthermore, by taking a sustainable, uniquely Australian approach to luthiery, Maton has both preserved and expanded the musical landscape of which it was born. After all, the steel-string acoustic guitar is an instrument of rugged individualism; a tool of the frontier. The first chords we learn are literally called “Cowboy Chords.” Given its pioneering history and the wildness of its terrain, it makes sense for Australia to have such a rich guitar culture, and It wouldn’t be what is today without Maton.
Call Us
Email Us